The Difference Between Still and Sparkling

Research: The Difference Between Still and Sparkling
by Norma Gail, Author of Land of My Dreams
“Still or sparkling?”

“Excuse me?” My husband asked.

“Your water, sir. Still or sparkling?”

“Still.” As our Scottish waiter walked away, we burst into giggles. “It appears that driving on the wrong side of the road isn’t the only thing we have to get used to.”

Writing a believable setting that you have only passing or no personal familiarity with can be a daunting task for any writer. Little did I know that two years following our trip to Scotland it would become the setting for my debut novel, Land of My Dreams. Had I known, I would have looked at things very differently.

Once you decide to write, every event, interesting building, unusual accent, even people at the grocery store become potential material for creating setting and characters. The villainess in my current WIP was a woman in the small town grocery store where I shop. 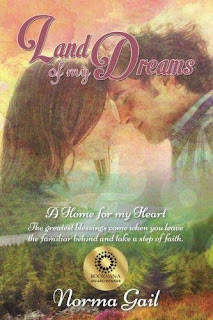 Here are some tips that made an editor think I had lived in Scotland when I only visited for two weeks:

1)   Travel, whether you’re writing historical or contemporary. If your story takes place in your own area, look at it as a first-time tourist. I dragged my husband to familiar places near our home time and again, listening to the sounds and inhaling the distinctive aromas of New Mexico. I thought about what I missed the most when we lived out of state for a while.

2)   One of my most powerful tools is a screensaver of over 400 images. Pictures from the internet are great as long as they’re for personal use only. I overlooked the spot where Kieran’s sheep farm is located in Land of My Dreams for only 15 minutes, but there are guesthouses on Loch Garry with great photos of the surrounding area on their websites. A friend who raises sheep was invaluable.

3)   Immerse yourself in music. My Scottish playlist has 218 songs. Can you sing “Scotland the Brave?”

4)   Watch movies, read tour books, and check weather reports. During a recent documentary, I realized there is a map of Scotland in my head.

5)   Study customs, holidays, colloquialisms, schools, churches, and local history—even for contemporary fiction, you never know when it might add some interest.

6)   Research restaurants in the area and read the menus online. Buy a cookbook and try some traditional foods. How does it smell and taste? What ingredients, both familiar and unfamiliar does it contain? I ate haggis, sheep’s offal mixed with spices and oatmeal, boiled in a sheep’s stomach.

7)   What political issues impact their lives? The recent referendum on Scottish Independence is a good example.

8)   What would they do for fun? The Highland Games in New Mexico gave a little flavor, but nothing compared to our day in Ballater, Scotland. A dapper, elderly couple, wearing tartan and eating ice cream cones under an umbrella while exclaiming, “It’s a lovely day”, still makes us smile and found their way into my book. “Hill-walking” is a national pastime.

9)   Get advice from people familiar with your setting. I found an editor who lived in Scotland and still has friends there.

10)   Go for the small details. Little things bring your story world to life. I studied online lists of slang, colloquialisms, and Scots-Gaelic to make the dialogue ring true. A friend who read an early version of my book suggested a man would never use the word “lovely.” Have you watched any television programs from the UK lately?

My current area of research is North Carolina to New Mexico from the 1770’s to 1920’s. Pinterest provides an awesome array of maps, antique furniture, old houses, period clothing, even links to articles and videos. For someone who took on a foreign country for their first book, it doesn’t seem like much of a stretch.

Be curious. Be creative. Be cautious. Become a contemporary of your characters.

It can change your story from still to sparkling. 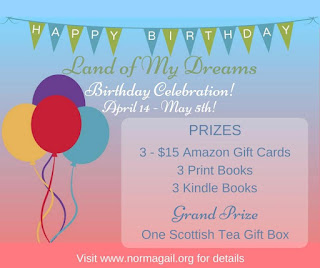 Land of My Dreams is now 3 years old! I have a contest running on my blog with great giveaways! Stop by at http://www.normagail.org/land-of-my-dreams-celebration/  to enter!

About Land of My Dreams:
Alone and betrayed, American professor, Bonny Bryant longs for a haven of peace. She accepts a position at a small Christian college in Fort William, Scotland, craving escape from her painful past. The passionate love, which develops when she meets fellow professor and sheep farmer, Kieran MacDonell, is something she never anticipated.

Kieran harbors a deep anger toward God in the face of his own devastating grief. When Bonny’s former fiancé reenters her life, Kieran’s loneliness draws him to a former student.

How will Bonny decide between her rivals? Can they set aside the past to make way for a future, or will it drive them apart?

Land of My Dreams spans the distance between New Mexico’s high desert mountains and the misty Scottish Highlands with a timeless story of overwhelming grief, undying love, and compelling faith.

Norma Gail is the author of the contemporary Christian romance, Land of My Dreams, winner of the 2016 Bookvana Religious Fiction Award. A women’s Bible study leader for over 21 years, her devotionals and poetry have appeared at ChristianDevotions.us, the Stitches Thru Time blog, and in “The Secret Place.” She is a member of American Christian Fiction Writers and Romance Writers of America. Norma is a former RN who lives in the mountains of New Mexico with her husband of 40 years. They have two adult children.