The Downton Abbey Within Me

The Downton Abbey movie is scheduled for release later this month. Some of my friends and I are already planning to go to the theater the minute it opens. In light of recent conversations I’ve had with my friends, it seemed appropriate to share this post. Disclaimer: I first crafted this Downton Abbey post for Karen Wingate’s blog Grace on Parade five years ago.
Accepting Who You Are….Gracefully
(and realizing it’s a blessing)

I recently took one of those silly on-line quizzes to find out which Downton Abbey character I would be were I living in that era. Silly, because the quiz asked questions such as “Which color do you prefer?” Easy. Which animal do I like? No problem. Which gift card would I like to receive? Piece of cake.

Some of the questions were a bit harder for me. For example, the quiz put up pictures and titles of movies and music albums and asked me to select my favorite for each of those categories. I hadn’t heard of most of them. And there was the question about which adult drink I preferred. Since water wasn’t a choice and I don’t drink alcoholic beverages, I picked one that looked pretty.

Obviously, the quiz is not based on sound scientific research principles. I knew enough about research to know I shouldn’t trust the results. But there it was. Only a few clicks away I discovered I was not Lady Mary –a character whose quiet ways I admire, but rather, Daisy Mason, scullery maid turned assistant cook.

I was devastated. I envisioned myself living in the main house with an elegant room upstairs. Instead, I was destined to do what I’ve done for most of my life: get up early, cook for my family, clean up the kitchen, work hard, and try to do what I’m told to do.

Others taking the test were reporting their results on social media. Hmm…better to act as if I didn’t take the quiz than to admit to my lowly state, right?

I was silent. Then I watched the final episode of Downton Abbey for the season and the verses from Proverbs 31 came to mind. I opened my Bible. This description of a wife of noble character says “She gets up while it is still night; she provides food for her family…” (v.15) and “She sets about her work vigorously…” (v.17) “She opens her arms to the poor and extends her hands to the needy.”(v. 20) “She watches over the affairs of her household and does not eat the bread of idleness. (v. 27)

And think about verses 28-30. “Her children arise and call her blessed; her husband also, and he praises her: ‘Many women do noble things, but you surpass them all.’ Charm is deceptive, and beauty is fleeting; but a woman who fears the Lord is to be praised.”

Maybe Daisy isn’t such a bad choice for me. I would like to be known for having a servant’s heart. I work hard and I try to be obedient to God. Daisy? I may not know much about music and movies, but I know I prefer coffee and cookies over tea and crumpets. Breakfast cookies to be exact…maybe I’ll head back to the kitchen… I guess it worked out after all.

By the way, the recipe for Breakfast Cookies is found in the novel
Libby’s Cuppa Joe.
They are delicious! Trust me! 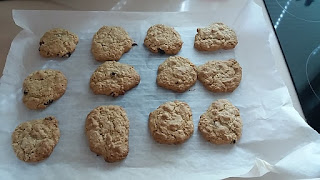