A "Which-Way" Book of Your Own Making 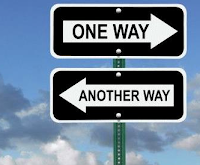 It's the fifth Wednesday of the month. Time to check out an excerpt from my current WIP. I decided to try something a little different today. Remember those "which way" books popular in the 80's? Well, pay close attention to today's excerpt. At the end I'm going to ask you which way the story should go. It's your chance to choose what happens next! Let's go!

“Don’t forget, Mom, I need your statements for the taxes. They should have been here by now.” Ethan crumbled a piece of cornbread in his bowl of sixteen-bean soup.
“Oh, uh…I have them. Actually, I was thinking about trying to do my own taxes this year.”
“Why would you want to do that?”
“I just think it’s time I took responsibility for some things.”
Ethan rested his spoon in the bowl. “It’s complicated, Mom. That’s why Dad asked me to do it in the first place.”
“He always did our taxes before he got sick.”
“Dad did everything by hand. I use a computer program.”
“And I have a new computer. You said the program was easy. A matter of filling in the blanks you said.” Why is he making this so difficult?
“You’re not doing your taxes and that’s final.”
“I am not a child!” Heat crept up Dottie’s neck. She clenched her jaw.
Ethan stood. He threw his napkin on the table. “Fine!” he shouted back. “Then don't act like one.” He left the room, grabbed his jacket and walked out the door.
Dottie sat at the table, her face in her hands. The tears pouring out like a watering can. A knot formed in her throat. “What is going on, God? Please help me. And help Ethan.”
The dishes were washed and put away. The leftover soup stored in two large plastic containers. Searching for the lids had taken a good ten minutes. Twice Dottie picked up the phone. Twice she laid it down again. Fighting with her adult son. No, that couldn’t be good. When the phone finally broke the silence, the shrill tone made Dottie jump. She raced to the kitchen where her house phone rested on the counter away from its cradle.
“Hello?”
“Hi Dottie!” Virginia.
“Oh, hello.”
“You sound like you were expecting it to be someone else. You okay?”
“I’m fine. A little tired I guess.”
“You don’t sound like yourself.”
“I, uh, well I sort of had a little run in with someone today and I’m trying to figure out what to do about it.” Silence stretched on the other end of the line. “Virginia, are you there?”
“Yes. I didn’t know if you were asking for advice or, you know, venting. Wouldn’t want to overstep my ground as they say.”
“I know. I’m not sure I want advice. It just makes you feel bad when you have any sort of disagreement, you know?”
“I know. I got upset with my sister the other day on the phone. Of course I don’t think she realized that what she said was hurtful. Maybe it shouldn’t have bothered me but it did. Anyway, you don’t need to say anything. I’ll pray for God to give you a discerning and forgiving heart. You ‘ll figure it out.”


“Thanks.” A discerning heart?  How about giving me a son who treats me like an adult? Music sounded from the other room. “Sorry, Virginia, I need to go. My cell phone’s ringing.”

Now it's your turn. How is Dottie feeling? Why? Are her feelings justified? And Ethan. What about him? Why do you think he feels the way he feels? And here's the big question: What do you think will happen next? Who do you think is calling Dottie on her cell? Which way should this story go?
Posted by A Novel Creation at 12:00 AM 2 comments:

Skywriting the Message of Love: A Psalm for the Summer

“The heavens declare the glory of God.”

Every culture, every people group on the face of the earth seeks God. Seeks to know their creator. Seeks understanding of the universe. God creates in each of us a desire to know Him. And it starts in the form of “skywriting.”

For the director of music. A psalm of David.
1
The heavens declare the glory of God;
the skies proclaim the work of his hands.
2
Day after day they pour forth speech;

night after night they reveal knowledge.
3
They have no speech, they use no words;
no sound is heard from them.
4
Yet their voice goes out into all the earth,
their words to the ends of the world.
In the heavens God has pitched a tent for the sun.
5
It is like a bridegroom coming out of his chamber,

like a champion rejoicing to run his course.
6
It rises at one end of the heavens
and makes its circuit to the other;
nothing is deprived of its warmth.

Feel free to share your own "skywriting" messages from God. I'd love to see your pictures!

Grieving for My Character: Guest Post by Tamera Kraft

I am happy to call Tamera Kraft my friend. She is smart and caring and a wonderful writer. I recently asked her to write this post for A Novel Creation. I know you will enjoy getting to know her here. And while you're at it, don't forget to check out her books. Her newest is a novella called Resurrection of Hope. To learn more about it or to make a purchase: Click HERE.

Grieving For My Character
By Tamera Lynn Kraft

Have you ever cried during a movie or while reading a book because one of your favorite fictional characters died? If so, imagine the grieving process for us poor authors who not only created those characters but also had to kill them off.

One character in particular still causes a lump to rise to the back of my throat three years after writing his death scene. Joe was an honorable Christian slave before the Civil War. The daughter of his master was an abolitionist who was helping slaves escape to freedom. When a wicked man attacked her, Joe stepped in the way and was killed.

I was devastated. I had no idea Joe would do something so heroic to save my heroine. I cried for a week whenever I thought about it. My husband tried to console me explaining that Joe was a fictional character. Poor man didn’t understand, nor did he understand how I could be so upset about Joe dying when I was the one who wrote the scene. I tried to explain that I had no idea Joe was going to do such a thing, let alone be killed, until I wrote the scene. He just jumped in the way of the bullet. My husband is still shaking his head about that one. He’s not an author.

I went through all the stages of grief with Joe. First I couldn’t believe he’d done that. I didn’t plan on him being killed in my plot outline. Second I became rather irate. I am in charge. I’m the writer. How dare one of my characters go off and get himself killed without my permission. During the bargaining stage, I thought if I rewrite a few scenes, maybe I could save Joe. The depression stage is where I cried for a week and ate lots of chocolate. Finally I learned to accept Joe’s death even though I never really got over it.

In my newest novella, Resurrection of Hope, I also had to deal with the death of one of my characters, but I can’t tell you who. You’ll have to read the story. Fortunately this time, it didn’t come a surprise. Since I planned this death from the beginning, I had time to emotionally prepare, but the loss of any of my characters is never easy.

There is an exception. Evil characters who cause my protagonist heartache give me a certain amount of satisfaction when I kill them off in delightful ways. Ah, the life of a writer.

So when have you grieved over a fictional character’s death?

Tamera Lynn Kraft has always loved adventures. She loves to write historical fiction set in the United States because there are so many stories in American history. There are strong elements of faith, romance, suspense and adventure in her stories. She has received 2nd place in the NOCW contest, 3rd place TARA writer’s contest, and is a finalist in the Frasier Writing Contest and has other novellas in print. She’s been married for 37 years to the love of her life, Rick, and has two married adult children and two grandchildren.