As your children grow up and marry, you often find yourself juggling the holiday calendar to accommodate “the other family.” It can be tough.

Many years ago, after our three daughters were all married, Tom and I began alternating the hosting of our holidays. We could expect the whole family at our house for Thanksgiving one year and Christmas the next. It worked and proved to relieve some of the stress our daughters felt about trying to visit both families in a single day. It also gave us the opportunity to plan a family snow skiing trip over the break when it was our turn to host Christmas. Or, as in 2016, a Christmas Cruise on the Disney Cruise Line.

The Morphing of Thanksgiving

Somewhere along the line, we started exchanging Christmas presents the day after the big turkey fest instead of mailing them or taking them to each house later. The girls called it “ThanksChristmas.”

If you want to know the truth I kind of like ThanksChristmas. My Christmas shopping is done. I get to see all of my kiddos for an extended time. We laugh, play games, visit, sing, eat, then start the whole thing over again. My daughters like to get up early for the Black Friday sales.

The added benefits to keeping this practice are many. The Christmas holidays are more relaxed. We carol, go to concerts and parties, attend school programs, and avoid those last minute runs to the shopping malls.

This, 2022, is one of those years. My Christmas tree is up. My Wisconsin kids will stay the week with me. The extensions are in the table. The turkey will be served. My mom will bring her cranberry salad and Allison will bring her pumpkin rolls.

It isn’t always the same. The year of Tom’s bicycle accident, Thanksgiving was only a few weeks away. It wasn’t our appointed ThanksChristmas time, but my whole family was present. I couldn’t focus. I was still reeling from Tom’s unexpected death.

I told my family, “I don’t think I can handle the smell of a turkey roasting in the oven all day. If you want a traditional Thanksgiving meal, it needs to be at someone else’s house.”

They voted for home.

They chose a nontraditional menu. David made his famous spicy Buffalo chicken dip.  We had wings, salami wrapped dill pickles, macaroni and cheese, well…you get the idea. Sounds like a crazy menu, doesn’t it? It was. But it was wonderful.

And we gave thanks.

Because even with all its traditions and expectations, Thanksgiving is about looking at the good in your life, adjusting to the bad, and celebrating with family and friends.

Wishing all of you a wonderful holiday season and…Happy ThanksChristmas!

If you read my post, “Walking on Sunshine” a few weeks ago, you know I love autumn. I love the changing colors of the trees. (If you missed that post, CLICK HERE.)

It’s difficult to capture the indescribable beauty of sunshine on the red, gold, orange, and green leaves. I’ve tried to share with my high school friends in Tampa how special that time of year can be with the vibrant hues of autumn. So when Mike came from Florida for a visit during that colorful season, I expected his firsthand view of the trees to astound him. Instead, he was amazed by the blue spruce “Christmas trees” beside my driveway.

“Everybody has Christmas trees growing right in their yard!” I overheard him say to his sister. “Becky has two right beside her driveway!”

I never considered the only “Christmas trees” native to Florida are long needle pines and cedar trees. Brokers import the more traditional trees to sell on Christmas tree lots there.

So when Mike returned to the area this past week, I arranged for him to visit my cousins’ Christmas tree farm. This is the very farm where my cousins, Steve and John, grew up. The fields once planted with hay and corn are now planted with rows of beautiful trees. Steve and his son, Brian, run the entire operation.

The day we visited was sunny and warm. And educational. Once planted, it takes eight years before a tree is mature enough to harvest. I never appreciated the investment of work and the length of time it takes to grow a beautiful tree I may display for only a few weeks in my home.

Then again, I should understand. I have three daughters. Three beautiful daughters.

They are good people.

They are smart and capable.

Of course it took a lot longer than eight years before they left our garden patch and planted themselves in their new lives. I’ve watched as they continue to grow as wives and mothers. I’m amazed at the way they use the gifts and talents God has given them. All three are strong, caring women.

Every day I thank God for my daughters. They need no lights, ornaments, or tinsel. Allison, Danielle, and Kendall are beautiful inside and out. 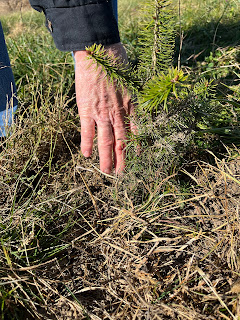 This little guy is only a couple of years old. 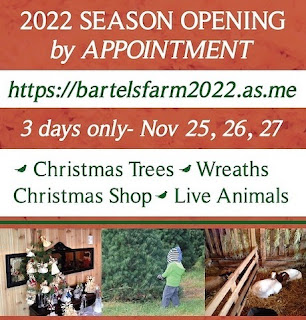 Want to visit the Christmas Tree Farm? This year you will need an appointment. But it is so worth it.

Posted by A Novel Creation at 9:30 PM No comments:

The Power of Care

The Power of Care

I am now an official graduate of the West Chester Citizens Police Academy. There were no caps and gowns. No band. No valedictory Speech. No…nothing like that. But there was lasagna.

It’s been quite an experience. I have learned and done so much over these past ten weeks.

I completed a “ride along”from 7:00pm on a Saturday night until 2:00am on a Sunday morning. (And note, I did call it a “ride along” instead of a “drive by”…an error I’ve made more than once.)

I learned the basics of fingerprinting.

I participated in a firearms simulator.

I participated in some basic S.W.A.T. training.

I learned about the division of “plain clothes” police officers and all they do.

I learned the ins and outs of the polygraph. (Now that’s something parents of teenagers could use. Or not.)

I learned the math, science, and technology behind accident reconstruction.

That is a mere sample of all I’ve learned. I’ll post the links to four other blog posts related to the Citizens Police Academy at the bottom of this page so if you missed one, you can take a look.

It’s been a great opportunity. Yet of all of them, Week 8 will forever stand out in my mind. For me, in many ways, it was the best.

The School Resource Officer (SRO) serves on the front line. Just as the rubber bullet is meant to deter a criminal, the SRO is shaping the attitudes, the thinking, of young children and teens before they may decide to move in an unhealthy direction.

That same attitude of caring permeates the department. It isn’t about “bad guys and good guys.” It isn’t an “us vs. them” attitude.

Despite the sirens, the training, the firearms, the S.W.A.T. team, the shields and the uniforms…

The big takeaway from my Academy experience …

Is not about “the use of force.”

It’s about “the power of care.”

Now I am a Graduate.

I already talked with a gal from the Alumni Association to tell her I want to be a part of that group. She asked me why I took the course. I told her about the suspense book I’m working on involving a string of kidnappings.

“You, know,” she said. “You may want to look into the FBI Citizen’s Academy.”

I’m still laughing…though I checked. There is  a website…

As promised: Here are the links to previous posts concerning my Citizen Police Academy Experience in case you missed one. Enjoy.

Posted by A Novel Creation at 9:00 PM No comments:


Of  Memories and Marshmallows

Those of you who follow my blog or Facebook account know that for the past eight years, October 29th has frequently been a tough day for me. My husband died on that day in 2014 from injuries sustained in a bicycle accident.

It is not a day to celebrate. Though we could. We wouldn’t be celebrating losing him, but rather cheering for him in his new heavenly home.

It is not necessarily a day of mourning, either. Yes, I’ve mourned. Losing Tom was the hardest experience of my life. But over these last eight years, God has been faithful to bring me to places of healing, surround me with people I need, and teach me how to move forward a little more each day.

This year we came together at my house. The weather was perfect for my son-in-law David to grill hamburgers. Kendall brought a pasta salad. Allison made brownies. Mom and I pitched in.

You get the idea.

After we ate, as the shadows of night began to fall, the guys built a fire in the fire pit. We roasted marshmallows and made s’mores. We talked about past fire pits and campfires. We laughed. We played as a family will do. Even Nora and Josie’s dog, Kiwi got in on the fun.

But more importantly, we built a new memory as we shared our hopes and dreams for the future.  Tom would have loved it.

Be sure to check in next week for my final (?) post on the Citizens Police Academy.

Now for a few pictures: 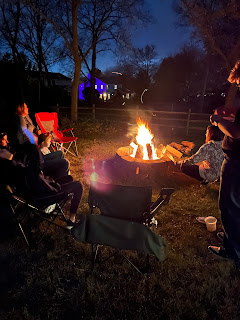 Gathering around the fire pit together. 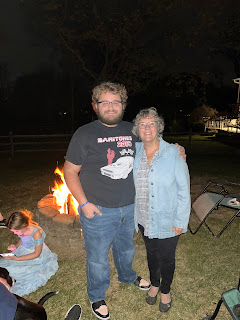 So, yes, my oldest grandson is taller than me. But my youngest  granddaughter is still shorter. (Whew!) 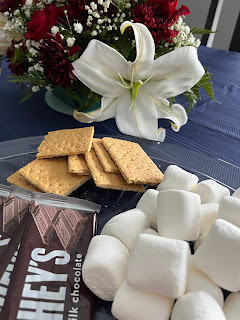 Mike sent a centerpiece for our dinner table and the makings for dessert were ready to go. 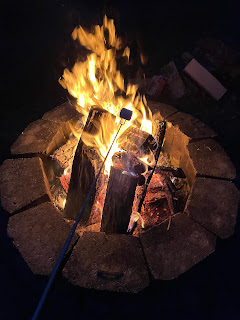 The fire was hot and ready. 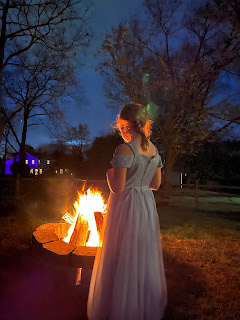 The evening wasn't all that cold. Here's Jo in her Princess dress. 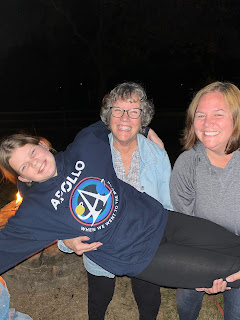 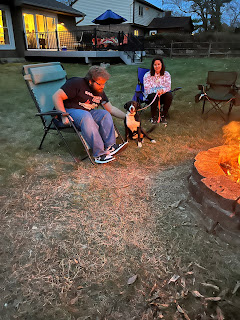 Posted by A Novel Creation at 9:30 PM No comments: