Today I’m sharing five more strategies I’m using in marketing Breathing on Her Own. These aren’t new and exciting. They are tried and true. (For the previous five see last week’s post dated April 30, 2014) 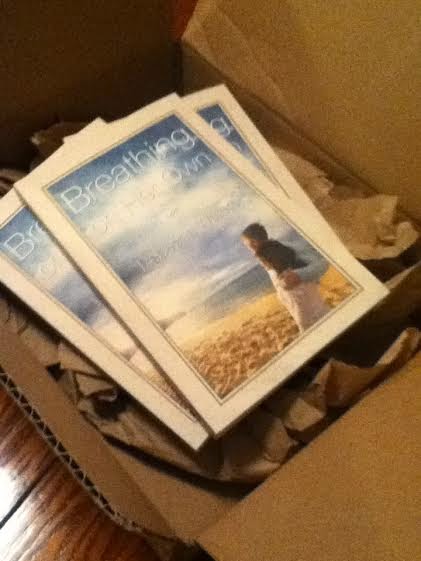 Giveaways- Giving away a copy of your book stimulates interest. So far I have offered two giveaways. The first was when I received my first shipment of books. I took a picture, posted it on FB and asked people to repost it to their friends. Was it successful as a marketing tool? I think so. According to my calculations over 7500 people not on my friend’s list learned about the book through this strategy. I drew one person’s name out of the hat (literally) and sent her an autographed copy of the book. I included a sheet of paper with ideas of ways to share information about the book. The woman who won the book, in turn, posted a picture on Facebook of the book when she received it in the mail with a comment and ultimately, put a review of the book on her blog. Pretty cool. What would I have done differently? For an even broader audience, I should have posted the giveaway on my author page and with some of my other Facebook groups. I’m learning.

The second giveaway was on Goodreads. I’m still learning that social media site for authors, but after the giveaway I know I gained several followers. I went from having fewer than a dozen close friends marking the book as a “want to read” to nearly 250 people I don’t know. I also received personal messages from people who entered the contest who didn’t win, but told me they were going to order the book anyway. I was fortunate to have someone from my publishing house who knew how to set up the Goodreads giveaway, but it is something any author can do alone.

Postcards- I thought about creating postcards around the same time I decided to have my daughter design the bookmarks. I wasn’t totally sure how I might use them. Then, a few weeks ago I received two postcard mailings from real estate agents in our community. Both had great pictures on the front and information about how to contact them. Both featured homes on the market in our area. One agent, however, took the time to write a personal note. All she said was “If you should decide to sell in the near future, I hope you’ll consider me to represent you.” She hand addressed it, too. Okay, maybe she had a party of friends or coworkers writing them out, I can’t be sure, but having the more personal message did the trick. It told me she already knows where I live. She cares about me. She’s not pushy. I like her. I saved the card. I don’t have my postcards yet. When I get them, I won’t be doing a mass mailing. But I do think sending a personal message to a librarian, a book club, or a small group who may be interested in my book is worth the postage.

Personal Appearance Events- By events, I’m talking about book signings, speaking engagements, a book club meet and greet and so forth. I have held one such event and have several scheduled. It may sound old fashioned to some, but I know me. I am a people person. I like interacting with other people. I’m convinced that people I personally meet will be some of my best word-of-mouth advertisers. My evidence? Four of the events have been organized by people who know me, read my book, and are excited to help. They set up these events for me.

What I’m doing to make sure this is effective? I’m asking people to sign-in at these events, giving me their name and email address. I’m sending them a thank you for attending. I’m asking them to “like” my author Facebook page (You can, too, by the way…I’m listed as RebeccaWatersAuthor), and I’m offering them guidelines on how to write a review.

I’ve only had one such event to date, but it was successful and garnered several book purchases, reviews, and more importantly, created a buzz about the book. Tonight, I will be at a second event at a community called “The Farm” in Myrtle Beach. I also have two booked at libraries and one at a church. Several others are in the works.

Website- I was encouraged by my publisher to have a website. This is way out of my range of knowledge, skills, and abilities. I could learn. In a year or so. I could have prevailed on my husband to give it a try, but there would still be a learning curve with which to contend. I put the word out on social media that I needed some advice. It turns out I have several friends who are into web design. Who knew? One of them volunteered his efforts. Yes…VOLUNTEERED. I won’t say it is complete, but it is usable and is developing. We decided to put it out there and learn as we go about what it needs to help market books. You can check it out at www.BreathingOnHerOwn.com

Interviews-Guest Blog Posts-Blog Reviews-One strategy to gain new readers is to work with other writers and readers who have blogs. These can take many forms. For Molly Jebbers’ blog, it was an on-line interview. I was the guest author for Tamara Lynn Kraft’s blog, Word Sharpeners. And Susan Baganz, whose book review blog is called Silygoos, featured a review of Breathing on Her Own around its release date. Each type of post gives readers a chance to get to know me better and to hear about my book. My personal goal is to have at least four such posts each month for at least the first six months.  So far, so good. I was the featured author for a week for the American Christian Fiction Writers (ACFW) site, I’ve had several reviews, and several opportunities to guest blog.

And of course there’s this blog where I shamelessly self-promote Breathing on Her Own available now through AMAZON or BARNES & NOBLE.