I didn’t expect this to be a two-part post. I expected to express my concerns about a weak plot last week, work on it, and write a bit about my characters this week. Not to be. I had great comments about the plot, read a book and a few articles on plot, and spent my week creating a graph for the book.

Graph? Really? I don’t necessarily outline my story, but rather create scenes and write from scene to scene. I’m a rather visual person. I went back to my initial storyboard and began plotting the scenes on a continuum. I placed them in order and where I expected turning points and the climax of the story. 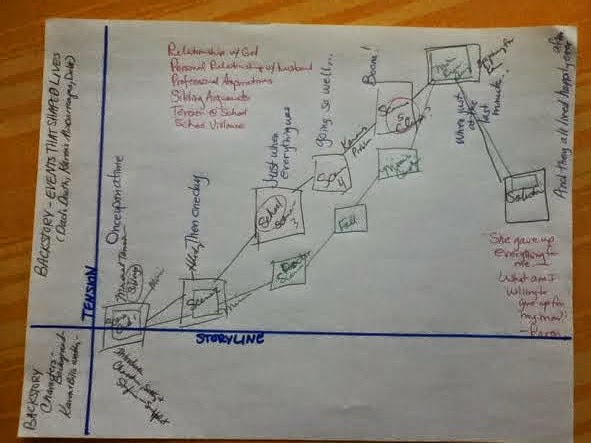 I realize now, I had lost sight of my original story. My story is about Karen. The dementia her mother experiences is the subplot. The dementia creates some of the tension in the story. But as it does to people in real life, the dementia Mimi experienced began to take over. I researched the stages of grief, because it defines the stages everyone involved experiences when someone has been diagnosed with Alzheimer’s.

The story had become a series of Mimi-isms –those moments when Karen’s mother had lost touch with reality. I had allowed the disease to complicate and constrict the story of Karen.

I was recently asked what I think is the biggest mistake writers make in terms of craftsmanship. Curiously, I said we writers tend to be a bit wordy, get off topic, often give way too much information, not trusting readers to be able to “fill in the blanks.”

Off topic? Try “off plot!” We can become so involved with the details we stray far from our intended story. B-O-R-I-N-G

Playwright/Screenwriter, David Mamet, said a good story line is simple. He outlined it this way: 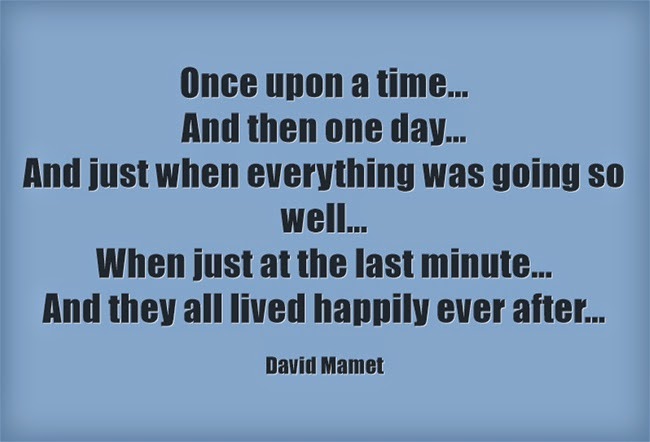 I’d be interested in hearing how you keep your eye on the prize. I'm all about "happily ever after."
Be sure to leave a comment below.

Before I let you go, I need to make an announcement about next week’s post. I know several people are signed up for email notification.
I was tagged for a World Blog Tour. My post will come out on Monday instead of Wednesday and remain up until Tuesday, July 8.

It’s a fun concept. Each author is asked to answer four questions. I will introduce you to three other authors, the one who invited me on the tour and two others who will answer the same four questions the following Monday. It’s your chance to get to know a few new writers and gives each author a chance to share with a new audience. Hope you’ll tune in…