I met Amy Blake at a meeting of the Ohio Chapter of American Christian Fiction Writers. She is interesting and fun. I asked her if she would agree to chat a bit on A Novel Creation.

Amy C. Blake is a pastor’s wife and homeschooling mother of four. She has a B.A. and an M.A. in English from Mississippi College. She contributed to Barbour's Heavenly XOXO’s for Women, Book Lover’s Devotional, and Every Good and Perfect Gift. Amy wrote short stories and articles for Focus on the Family,Mature Years, Significant Living, Vista, Encounter, and other publications. She won awards at St. Davids Christian Writers Conference and West Branch Christian Writers Conference. The Trojan Horse Traitor quarter finaled in the 2011 ABNA contest. Her juvenile fantasy novel The Trojan Horse Traitor, releases in November, 2015, and her new adult suspense novel, Whitewashed, released February 15.


Amy, I know my readers love to know about writers, so tell us a little about yourself, your family, dogs, cats etc.

I’m a pastor’s wife and homeschooling mother of four from Columbus, Ohio, and we have a spoiled, 11-year-old English Springer Spaniel named Chrisgo. I earned my BA and MA in English from Mississippi College, the place on which Verity College in Whitewashed is loosely based. My husband and I met at Mississippi College and argued against each other in Argumentation class. We still debate about who won the argument because the teacher voted for him while the class voted for me (which, of course, means I won).

You get my vote for the win! Let me ask, what made you want to be a writer?

I’ve always loved to read, though for years I never had enough self-confidence to believe I could become a published author myself. Eventually, I took a couple of writing courses, attended writers’ conferences, and decided to give writing a try. I started with short stories, articles, and devotionals and was encouraged when some were published. Then I moved on to books. My first novels were pretty bad, but they helped me learn how to write. Now I’m glad I stuck with it through the discouraging seasons.

Good advice. I think we all experience those times and it’s good to recognize our early efforts as a time to grow and learn. What do you do in those times when the “muse” is uncooperative or when you do feel discouraged?

I write anyway. If I can't create anything new, I edit my old stuff. Sometimes I shift gears and work on blogs or articles for magazines instead of fiction for a while. Other times, though not often enough, I go clean the house instead.

I’m laughing at that only because I, too, have to switch gears and wash dishes or something to get the creative juices flowing again. Is there a particular song or Scripture verse that’s made a big difference for you?

Yes, actually Isaiah 6 reminds me of how very massive and majestic God is. When I get overwhelmed with all the little details in my life or feel tempted to throw myself a pity party, I need the reminder of who God is and why I was created--to glorify God in all I think, say, and do.

Tell us a little about your newest book, Whitewashed. By the way, I love the title. What age range is it for? And with female protagonists, I'm guessing it's mainly for girls, or is it for both genders?

Whitewashed is primarily for girls, especially those in the older teen/younger twenties range who are transitioning into adulthood. However, I've had a few male readers tell me they enjoyed the book, and many women all the way into their senior adult years tell me they couldn't put it down.

What’s the novel’s theme? Or what do you want readers to take away when they’re done?

Whitewashed has several themes interwoven into the plot, but I'll just tell you about one. Patience is a real stickler for truth, so much so she sometimes can't see people. She's even been known to scream truth in the faces of people she loves, and in so doing has caused much more harm than good. I want the reader to learn, along with Patience, that truth and mercy go hand-in-hand. Just as God is a God of truth who is merciful to His children, we should be people of truth who also show mercy to others.

Whitewashed is book 1 in the On the Brink series. The other stories feature Patience's sisters, correct?

Actually, the other two On the Brink books feature Patience's two best friends, Nat and Christy, who are also homeschooled. Christy's story is set in Buckeye Lake, Ohio, and ties into the 1920s when Buckeye Lake--with its amusement parks and nationally-known ballrooms--drew huge crowds. Nat's story is still in the works, though I'm pretty sure it'll be set in Washington DC.

Super. I’ll look forward to those. Tell, me, what do you like best about writing?

I love creating on paper (or computer screen) the people, places, and plots living in my brain. I also love it when, after several months, I reread a draft for revision and find myself laughing or tearing up at a scene or line I forgot I’d written.

Thank you so much for joining us today. Friends, if you are interested in purchasing Amy’s book check out these links:

And you can connect with Amy using these social media links: 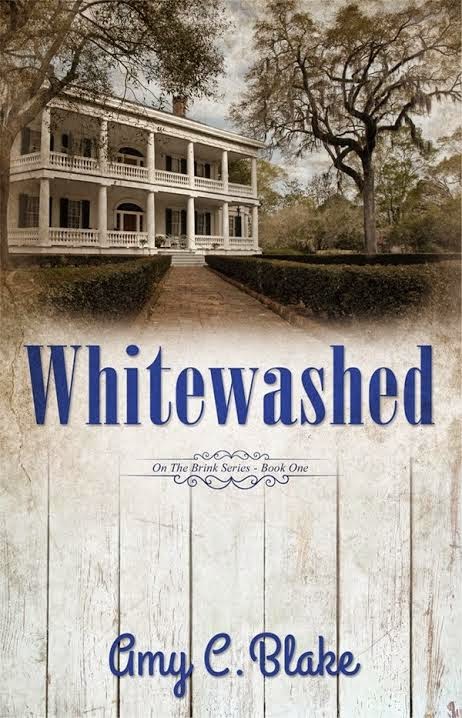 Eighteen-year-old Patience McDonough has a plan. Despite her parents’ objections, she will attend Verity College in Hades, Mississippi, and live with her grandparents. She’ll complete her degree in record time and go on to become a doctor. But things at the college are strangely neglected, her class work is unexpectedly hard, Grand gets called out-of-town, and Poppa starts acting weird—so weird she suspects he has Alzheimer’s. On top of that, she has to work extra hours at her student job inputting financial data for the college—boring! But soon her job gets more interesting than she’d like: she finds that millions of dollars are unaccounted for and that something creepy is going on in the Big House basement. She discovers secrets tying her family into the dark beginnings of Verity, founded on a slave plantation, and she is forced to question the characters of people she has always trusted. Finally, confronted with a psychotic killer, Patience has to face facts—her plans are not necessarily God’s plans. Will the truth set her free?

Want to talk with Amy? Leave your comment or question below.