I am thankful for my writer friends. So….for the month of November I decided to interview four Ohio writers from my ACFW writing group. They have been strong encouragers to me over this past year. We have laughed together, shared meals together, and served as “sounding boards” for each other. This is the perfect time to order a special book for someone you love for Christmas, so I bring to you, four very different books from four very different authors. I know you will learn a little something from each of them….Enjoy!

Cindy Thomson is the author of seven books, including her newest novel, Sofia’s Tune, the third book in the Ellis Island series. She also writes genealogy articles for Internet Genealogy and Your Genealogy Today magazines, and short stories for Clubhouse Magazine. Visit her at www.cindyswriting.com, on Facebook at www.facebook.com/cindyswriting and on Twitter: @cindyswriting

Purchase your Kindle version here: http://amzn.to/1NMYaw0 NOTE: The book is also available on Amazon in paperback.
And here is a link to the first chapter that people can read free: http://cindyswriting.com/read-sofias-tune-first-chapter-free/

Now on with our interview! Yay!
Rebecca: Cindy, last week I asked our friend, Rosanna Huffman how she came up with the title for her novel so I’m going to ask you the same question. How did you come up with Sofia’sTune? And let me say, I love the cover! 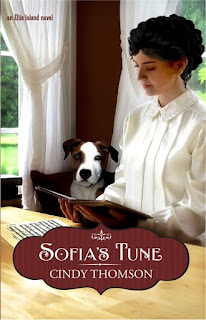 Cindy: Thank you. I’m very happy with the cover, too. Actually, I directed this cover myself. It was designed by the talented Kim Draper and photographed by my daughter-in-law Kelsey Thomson, so it is very special to me.

As for the title, I knew I wanted to use the advertising icon, His Master Voice, which was beginning to become popular in the era of my novel. And I knew my male character would be a Vaudeville musician, so I wanted something musical, but with a dual meaning. Sofia’s Tune refers to “changing your tune” or changing the direction of your life. Being the third book in a series, it follows a pattern: Grace’s Pictures, Annie’s Stories, Sofia’sTune.

Rebecca: How long have you been writing?

Cindy: Trick question? I made up stories as a kid, and wrote stories in study hall when I was a teenager. Always a storyteller in some aspect. I began writing seriously with an eye on publication fifteen years ago.

Rebecca: I’m seeing that a lot. Many of us tended to write stories as children. So, I know this will be of interest to my readers: Once you decided to take the writing seriously, where did you start and how did you get published?

Cindy: My first published piece was on a web site that, by the way, no longer exists. I was paid $25! I continued on with magazine writing and published many pieces in genealogy magazines, which I continue to do today. But historical fiction has always been my passion. My first two published books came out in 2006. A historical titled Brigid of Ireland, and a baseball biography I co-authored with my cousin, Three Finger: The Mordecai Brown Story.

Rebecca: I’m familiar with Brigid of Ireland, but must admit, I haven’t read the second one. Those genres seem so different! Where do you get your story ideas? 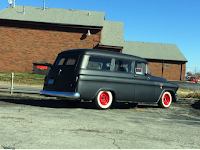 Cindy: Oh, my. Ideas are everywhere! It amazes me that people ask this question a lot, but I suppose not everyone looks at life like I do. I took this picture yesterday and thought of story ideas. A getaway car? Something Bonnie and Clyde-ish, but not very successful because, you know, it has red wheels that stick out like a sore thumb! Ideas are everywhere, but mostly I get mine from the stories of our ancestors. There is so much inspiration in their tales to keep me writing for the rest of my life.

Rebecca: [laughing at the red wheels] Kind of reminds me of a short story I wrote as a teen where the only clue was that the criminal had a moustache and the kid-detective solved it by discovering every suspect had a moustache except one…the guilty guy had shaved his off to try to disguise himself!

I digress. Sorry. Let’s see. The next couple of questions are about the writing craft itself. Many of my readers are new to the writing game, so I know they’re always looking for strong advice from published authors.

One question I’m often asked is how an author learns to write strong, believable dialogue. How did you come by that or what advice might you give new writers?

Cindy: I learned by reading best selling current fiction and listening. Of course you can’t write dialogue exactly like people talk (try it and you’ll see what I mean!) but paying attention to how real people talk and then studying how best selling authors depict that speech is a great way to learn. I also learned a lot from conference workshops on writing good dialogue. No editor so far has complained about how I write dialogue. (Other things, yes, but not dialogue!)

Rebecca: Good advice. How do you approach describing a setting to your readers? I mean, do you use visual images or what?

It’s really important to paint the scene so that the reader feels that he or she is actually in the story and participating in what’s happening. This involves using the five senses and showing how the characters feel and respond, rather than telling the reader how the characters feel. Readers need a sense of time, an idea of whether the place is perilous, comfortable and nostalgic, or adventurous. I was a mentor for the Christian Writers Guild for many years and their curriculum did a great job leading writers through this process. If you don’t properly set your story in the first paragraph or so you will confuse your readers. And no one wants that.

Rebecca: I agree. If your readers are confused, they’ll put the book down. So…what was your biggest challenge after having your first book published?

Cindy: The same as it is now with book seven: finding readers and introducing them to my book. In some ways it’s easier now than when I first started. Few people were reading electronically and Facebook was just getting started, as were personal blogs. Twitter and my first novel were born the same month. It’s much easier to reach out now, but with the vast numbers of books published each year growing at an incredible rate, it’s still hard to be heard above the noise. I’m constantly learning, though. It’s a challenge I’m taking on the best I can because after all, I write books so people will read them.

Rebecca: What advice would you give to aspiring authors for writing and/or publishing?

Don’t rush to publication. It’s so easy to do today, and I see lots of people making this mistake when they decide to publish their own books. There is no substitute for a professional editor. Don’t skip this step, even though it’s expensive. By having six traditionally published books I learned how much good editing helps. A good editor makes you look a whole lot better. Don’t skip good design either. A bad cover can sink your book, and be sure to get opinions and don’t just rely on what you like. Someone else might see something you didn’t, and you want your cover to be appealing. Take lots of time in the process. One thing people complain about traditionally publishing is how long it takes to get your book out. It’s true. It can take a year or two. But that’s because several rounds of editing are taking place, and more than one person is checking for mistakes and giving feedback about covers, and lining up pre-publication reviews. In my opinion an independently published book should go through the same things, and that takes time. Remember what your parents told you growing up? Rushing through a task results in mistakes. Absolutely true in publishing.

Rebecca: Okay… Let’s try a fun question. Dogs or Cats? Which do you prefer?

I’ve had both. However, I’m glad you asked because Sofia’sTune has a very important character, a dog named Luigi. When I thought about the characteristics of a really good dog, I realized we could learn something from them, especially when it comes to listening to the master’s voice.

Rebecca: I love it! And how clever of you! That brings us back to Sofia’s Tune and this question: What is one take-away from your book you hope readers will identify with?

Cindy: To look at life’s challenges from different angles. The Italian immigrants I write about had preconceived ideas about how life should be. Some of it was good and worth keeping, but some resulted in keeping secrets that harmed instead of helped. Changing your tune is sometimes the best strategy to overcome a problem instead of just accepting defeat.

Rebecca: Cindy, as always, it is great to talk with you and pick your brain about writing. It’s part of what I enjoy about our ACFW Chapter meetings.

More about Sofia's Tune...
In Sofia’s Tune, we meet Sofia Falcone, a young woman who has been living in New York only a short time when she is stunned to discover a family secret, one that soon sends her beloved mother into a mental institution. Scrambling to keep her job and care for her mother, Sofia is convinced confronting the past will heal all wounds, but her old world Italian family wants to keep the past in the past.

During this time, she encounters Antonio, a Vaudeville pianist with a street-smart dog, seeking to discover why his father was mysteriously killed. Their crossed paths uncover a frightening underworld in Little Italy. Bringing the truth to light may cost Sofia’s mother’s sanity, Antonio’s career, and the livelihoods of countless immigrants. Change is on the horizon, but it may not bring what they expect.

Your turn: What are you learning from these interviews? How has Cindy encouraged you as a writer or reader today? We want to hear your thoughts. Leave your comments in the section below. I know Cindy would love to chat with you.

Posted by A Novel Creation at 7:23 AM