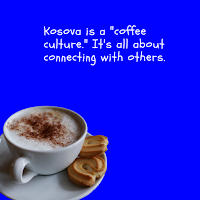 Kosovo is a coffee culture. In fact, I had my first taste of a macchiato in 2005 when my husband and I brought five of my teacher education students to Kosovo to work with Albanian teens learning English. The country was still reeling from the war. Restaurants were few and far between. Bakeries were starting up again but only sold bread. But coffee? You could find small cafés serving coffee dotted across the land.

Coffee shops in today’s Kosovo are abundant. People gather before work, during work, and after work for coffee. Business is conducted over coffee. Deals are made and alliances formed with a macchiato or Turkish coffee in hand. But having someone "over for coffee" or "going for a coffee" has other subtle meanings.
First, most often when someone suggests you come over for coffee, they are opening their home to you in a gesture of friendship. Coffee in this case may mean coffee, tea, sweet baked goods or light snacks. It could also mean a spread of heavy cakes and pastries and on occasion something akin to a light meal. The real point of getting together for coffee is friendship. Talking. Sharing. Taking interest in you as a person.

Going out for coffee is also a gesture of friendship and an easy way to get an entire group of people together. A few weeks ago, several of us from the school where I teach went out for coffee at a place called Soma. It is part coffee shop and part bookstore. By US standards, Soma is a very upscale place to meet. Frazier would have approved. We gathered and chatted. Some people had coffee, a few had tea or a bottle of water. Everyone enjoyed the social hour. At the end of our time together, a few people went home to have dinner with their families while others strolled Mother Theresa Boulevard to shop or grab a sandwich and a couple of us slipped into a restaurant for a more substantial meal. Coffee was the start to our evening. Not the end.

The school where I teach offers a variety of specialty coffees. Teachers meet in the cafeteria over a latte to discuss student needs or make plans. And if you’ve followed my blog, you’ll know the cafeteria workers will even deliver a cup of coffee to your classroom if you find yourself in need. No one thinks anything of it. Kosovo is a coffee culture.

Of course there are a few cultural nuances to having coffee. I learned this the first few weeks I arrived in Prishtina. I often ride the bus to school. One of the older gentlemen who takes tickets quickly realized I was American. (Honestly, I sometimes think it’s stamped on my forehead.)

Anyway, he started talking to me in nearly perfect English. He told me how he and his sister studied in Paris many years ago when Kosovo was part of communist Yugoslavia. He said his French was much better than his English. As the bus came to my stop, he motioned to the restaurant across the street. Well, it is called a restaurant but they only serve coffee.

“Would you like to stop for a coffee with me?” he asked.

“No, but thank you. I have a meeting at school.”

At school I told my friend Ruth about the nice man on the bus and his offer to have coffee.

“How old was this man?” she asked.

“Oh, about my age or maybe a year or two older. I think he liked practicing his English.”

Ruth laughed out loud. “Good thing you didn’t take him up on it! When a man asks you for coffee, it’s practically a marriage proposal!”

I was in shock. My teacher friends all found it funny. I’ll never know if they were right. I’ll never test those waters. I’d still like to think he simply wanted to practice his English.

And have a cup of coffee. Because, after all, Kosovo is a coffee culture.

Join me in Kosova (the Albanian pronunciation for Kosovo) in Southeastern Europe. Each week I share my experiences. Leave your comments and questions below. I’ll try to address each as best I can. And if you don't want to miss a post, simply add your email address in the box on the right where it says "Follow by email."