Several weeks ago I invited readers to enter a writing contest based on the names of Yankee candles. Today I'm pleased to announce the winner, Ellen Burton of Ohio! Congratulations to Ellen and thank you to all entrants and judges! In addition to a $10 Amazon gift card, Ellen's story is featured below. Enjoy!

Erica stood on the pier breathing deeply. She closed her eyes, imagining the cleansing ocean air filling every space in her body. The sun would be up soon. Erica watched as an older couple made their way up the sandy beach. Few people were out this morning. You could always tell when the school year started. The beach was calm and quiet. Young families were nowhere to be seen.

Erica sighed. If Rob hadn’t left her totally out of the blue six years ago, they might be one of those young families. And then one day they would have been that older couple, simply enjoying each other. Past the hustle and never in a rush.  Instead, here she was, standing on a pier that jutted out into the Atlantic Ocean all by herself.

Stop it. The voice inside her, the one that definitely saved her more than once, told her to stop feeling sorry for herself and enjoy the moment. “Never again,” she told the inner Erica. “I am a strong woman!” she shouted.

Erica jumped and looked around. She saw no one.

“Down here!” the male voice called.

Erica peeked over the railing. A man, maybe in his mid to late thirties was looking up, grinning. Erica laughed. “I didn’t think anyone was around.”

“Sorry if I startled you.”

The tide was slowly creeping in. The man waved his goodbye and Erica turned back toward the sunrise. A glimmer of orange was making its way above a gray cloud near the water.

This happens every day. The sun goes down and the sun comes up. Even in my darkest times, the sun is doing its thing.

The clomping of feet on the wide wood boards of the pier shook Erica out of her moment of reflection.

Erica turned to see the man from the beach walking toward her. A touch of gray, but definitely in his thirties.Why was she even noticing? Stop it.

“Just enjoying the sunrise,” she answered.

“I get it. I try to jog nearly every morning I can so I can see the sun coming up over the ocean. You’re not from around here, are you?”

The man chuckled. “No, it’s just that I know nearly everyone on the island and of course most of the tourists are gone for the season. I’m Andy.” He stuck out his hand.

“Erica Tanner. I usually come a bit earlier in the season, but this year…well, my schedule didn’t work out.”

“Well, it was nice to meet you, Erica. See you!” Andy started to leave.

“All my life. My place is over there.” The man pointed toward the seaside woods to the south of the pier. “Through the trees.”

“I thought that was all swamp.”

“Nope. In fact there’s a trail a lot of people hike through there. You should try it sometime.”

His face was kind and he looked safe, but Erica had learned to be wary of strange men –especially the good-looking ones.

“I’ll mention it to Carson.”

“Yeah, he’s sleeping in.” No need to tell this stranger that Carson was her cat.

“Oh. Well, if you two decide to take the hike, there’s a great hamburger joint near the end of the trail. Best on the island. Tell them I sent you.”

“Thanks. Will do.” Erica watched as the tall, muscular man strode back down the pier. I wonder what a man like that could do here for a living? The question lingered as she made her way back to the cottage she rented through Airbnb. Carson greeted her at the door.

“The only business on the island is tourist trade and even that is iffy,” she told her cat as he wove himself in and out between her legs. Erica opened his tin of food and dumped the contents into his small dish. While Carson ate, Erica fixed herself a bagel with cream cheese and a glass of lemonade.

Andy was on the beach the next morning and the one that followed. He waved but didn’t stop to talk. Erica found herself wishing he would. A cat can only provide so much company.

Three solid weeks at the beach sounded blissful when she booked the cottage during the height of the Jamison-Benton merger. The extra week Rudy Jamison promised her for seeing the details through would make this her longest stretch at her favorite seaside island.

“September will be perfect weather,” her friends told her.
“A well deserved rest,” her coworkers said.

No one mentioned the beach would be deserted. No pick-up volleyball games. No fire pits with everyone pitching in food for a spontaneous party. No people. Nothing.

“Even most of the restaurants are closed,” Erica told Carson one night. “There is the one Andy mentioned. That might be worth a try.”

Erica was not about to head into the dark woods on a trail she didn’t know to find the place. “Maybe in the daytime.”

The sun had already set as Erica started to make dinner. She had just turned on the stove when the electricity crashed. Erica looked out the window. Other lights were on in other homes down the road She pulled her phone out and opened the Airbnb app to report the problem.

A half hour later a car pulled in her drive. Andy! So that’s what he does. He’s a maintenance man. She listened as he made clanging noises outside and grumbled under his breath.

“Ah, it’s you,” he said when he finally came to the door. “It’s the generator. I can’t seem to fix it. I’ll have to call someone.”

Just then the cat dodged between the two and dashed out the door. “Carson!” Erica called as she raced after the cat.

Andy was the first to reach the escapee. “So Carson’s a cat,” he said. “Interesting.” He stroked the cat’s fur as he handed Carson back to Erica. “Do you have any appliances on?”

“The stove, an iron, anything that could cause a fire with a power surge when we get this fixed.”

“The stove. I was getting ready to make something to eat. I’ll turn it off.”

“I called a guy, “ he called after her. “Jeff can fix anything,” he added as Erica returned to the porch. “He’ll be here shortly. I’ll be back.”

Erica sat down on the front porch of the cottage, Carson in her lap and the flashlight from her cell phone offering the only light she had. A few minutes later, Andy’s car pulled back in the drive. He emerged with a bag under each arm.

“Dinner!” he said.  He set the bag of food down and sat down beside Erica. “I didn’t forget Carson, either. Carson, you have no idea how happy I am to meet you.”

Erica stared at the meal spread before her and the tuna for Carson. “This looks great.” 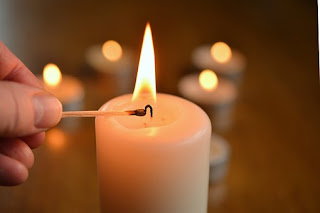 Andy pulled a candle from the second bag and lit it. “It could take a while for Jeff to get here.”

“Should I try to ping the owner again?”

Meet Ellen Burton:
Ellen is a wife and mother of two. She loves to read and her favorite author is Nicholas Sparks. She dreams of one day having enough time to sit down and actually write a novel or at least a novella.

Also, It Is Never Too Late to Give to the Thomas R. Waters Memorial Scholarship Fund for Ergonomics Research! Perfect for Your End-of-Year Giving to Reap Tax Benefits....Okay, Truth? I Want It to Grow. If It Helps You...Great! http://ow.ly/TPqg50x9cea