Who Is My Neighbor

When I was a little girl, I lived for a time in Tucson, Arizona. My parents treated it as an adventure, though they moved there for my health. I had asthma. My strongest memories of our time living “out west” are of my best friend, Moey. She had another name, but her nickname was Moey. I remember playing dolls with her and climbing on the fence in her back yard. I have fond memories of watching her mother make tortillas on the hot flat iron skillet, turning them with her fingers. Moey taught me my first Spanish words. Moey was Mexican. And she was my neighbor.

In the middle of first grade, we returned to Ohio. I supposedly had outgrown my asthma by then and my grandfather had a heart attack. We moved to the “little farm” tucked in behind Grandma and Grandpa’s big farm so my dad could help Grandpa. My parents had dear friends who had three boys. The Hubbard boys took turns spending time with us at the farm. The boys were basically city kids. I was basically a country girl. They went to a city school. I went to a country school. It didn’t matter. Sure they lived far from us, but most farm kids are used to having their friends live a good distance away. The boys were like brothers to me. They were my neighbors. 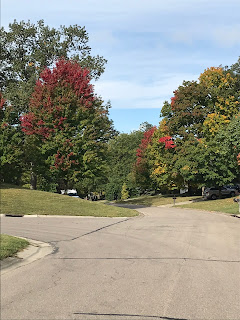 I walk in my neighborhood now. It’s a suburban community and at first glance some may think the only diversity is the style of homes and the make of cars. There are also campaign signs for both sides of the political fence. Still.

The neighbors on one side of my house are a young couple with two very young children. On the other side is a couple closer to my age.

Then there’s the family down the street who moved here from France for his work. Their children love it when I speak a few phrases in French. They are a long way from home and during this pandemic, they don’t know when they will return.

Around the corner is Rosa, a woman from Italy. She praises me for my pronunciation of the few Italian words and phrases I know. She enjoys talking about her life in Italy. Sometimes we walk along together. Socially distanced of course.

Two streets over is a family from Macedonia. We’ve had much to talk about. I lived in that part of the world for a while.

Down the street is a black family. The man is often out working in his yard when I take a walk. He had opened his home to his brother-in-law and his family when their home sold faster than their new home was built. Building slowed at the beginning of the pandemic so they had a full house there for while.

Different people. Different backgrounds. Different views. Some even speak different languages. But these are my neighbors. It is one of the things I love about living in the United States. We are all different and yet all want the same kinds of things for our families: a safe place to live, food on the table, the freedom to share our views, the freedom to worship.

And the freedom to take a walk in the neighborhood.

I’ve visited many parts of the world. I’ve met wonderful people everywhere I’ve traveled. But outside of the USA things look different. People struggle to have a voice. I’ve been to places where beggars are trying to gather enough for their next meal. I’ve been in countries where police turn away from crimes.

I remember when I first came to realize the vastness of the United States. I was an adult and on my first visit to the British Isles. An Irishman visiting Scotland was staying at the same place we were staying. We were in the swimming pool when he spoke of his visit to America. He spoke of it in terms of time zones.

I had traveled the US, but it didn’t strike me as that large until I heard him speak.

Later on that same trip, when we drove through Europe, the places that appeared so big on my world history map in school were actually small. We could visit several countries in a days drive.

Yes we are a large country. But we are Americans.

We stand and fight for each other.

And neighbors should be friends.