My readers know I choose a word for each year. A single word.

It doesn’t have to be a special word when I choose it. It may be a word I keep bumping into in various places. Sometimes I’ve chosen a word from my morning Bible reading. On occasion it has been a word I heard on television or a word that met my mood at the time. 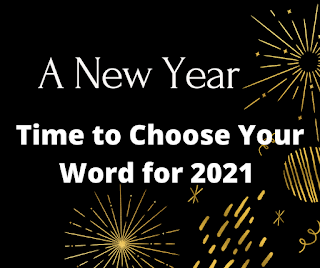 I never actually have a clue how that word will play out through the year. It is always different. It is always a time of learning and growing for me.

Sometimes my blog posts or journal entries reflect how the word is surfacing in my life. I don’t keep a daily journal about it, though. Somehow doing so would sort of box in the word; kill it.

I would be forever mindful of that singular word. Intentional. I am sure it wouldn’t be the same experience I’ve enjoyed for the past several years. No, choosing the word and letting it take its own shape and meaning is best for me.

Mostly. Last year my word was “QUIET.” I’ve promised my family I won’t choose that word again. Although the year was anything but quiet, the word will forever be connected to other words such as “isolation” and “quarantine.”

As 2020 was drawing to an end, I started thinking about choosing my word. I jotted down random words I found intriguing or ran into repeatedly. I considered words such as “resilience,” “determination,” or “health.”

I realized those were the 2020 words I’d lived through. The words spoke of me doing something. The onus was on me to make those words happen. It sounded like work and I was tired.

I have found the best words I’ve chosen are words that take on a life of their own instead of ones I throw around like a motto.

It was mid December when I woke up one morning with the thought of the word I chose for this year. I let it roll around in my head for a few days before saying it out loud.

I hesitated to share it. It was too simple.

Yet there it was. It popped up in my Bible reading. It showed up in music I played. The word seemed to be ever present, but not one I had noticed or considered before.

It isn’t that I have a notion of how that word will play out in 2021. I can’t wrap my head around that yet. I know from past experiences it will take on a shape of its own and in turn shape me as a person. It will influence me as a daughter, mother, grandmother, friend, and yes, as a writer.

My writing group gathers on Zoom the first Saturday of the month. We met on January 2, the month still fresh and clean and mostly unscathed. The year loomed full of promise ahead of us. In our planning for the January meeting, we decided to allow those who choose a word for each year to share it.

Some members of the group shared not only the word for the year but their thinking behind it. Others held onto the notion of the surprise the word will bring. They said they don’t know what’s in store, but this was the word to capture it.

Members of the group had great words.

They shared words such as “Believe” and “Restore” and “Rely.” To me those words lean into a sense of trust and hope.

Some offered words I associate with action. Words like “Lead” or “Priority.”

Of course none of us know how any of those words will play out in the coming year, but they were strong words; Words that didn’t need an introduction. Not like the word I chose.

I shared my word. It seemed small. Inconsequential. Weak. Yet it was mine.

Though small, I’ve decided my word for the year is mighty. It doesn’t require anything of me except to BE the person God made me to BE. I don’t need to be what others think I should be. Be/Say/Do. I can simply BE me.

I find rest in that. And after a year of  “quiet” such as this past one, I need it.

Do you have a word for the year? Please share it. I’d love to hear from you. 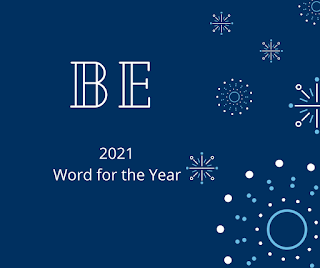