Last week I wrote about using the firearms simulator at the Citizens Police Academy training. I mentioned this training is important because our officers must learn critical decision-making skills. CLICK HERE if you missed that post.

I shared with you my overall success. Note I said, “overall,” not total. I joked with a friend that I managed to get a pretty good score…and only killed one civilian. Nothing funny there.

What? Yes it was a simulator, but killing one civilian is one too many.

I’ve been thinking this over all week. I know what happened there, but how it plays out in real life may be a more powerful lesson.

First, let’s go back to the simulator. We were paired with another classmate for the firearms simulator activity. The person with the weapon was to assess the situation alone and choose to fire or not. The other person was to remain quiet.

That worked for the most part. But in this one situation, the woman behind me blurted out, “Is that a gun in his waistband?”

She said there was a bulge. He reached around and I shot. I got him…and his flashlight never touched me. You read that right. The man was removing a flashlight. There was no gun.

Would I have reacted the same way on my own? Or did the woman’s voice behind me influence my decision? I think it did. I never saw a bulge or a gun. I listened to what she said and what she saw.

I’ve mulled this over and over. Right or wrong, the voices of others who are equally uninformed are able to influence our thinking. We must…yes MUST…think for ourselves.

I hate to use this example because it comes from the Christian world. Many people lost a lot of money and even more confidence in preachers when Jim and Tammy Faye Bakker defrauded thousands of people of millions of dollars. The Bakkers spoke. People listened. Even if it didn’t make sense that anyone and everyone investing in Heritage, USA would have all the benefits promised. There is only so much to go around.

And remember Jonestown? Jim Jones spoke. People listened. Right up until the moment they drank the Kool-aid and died.

Those examples are old…but they ring true today. I fear many people simply listen to something on television or the radio and make decisions based on what they hear from someone else.

People with their own agenda like to tell others how to think or what to do.

We are entering the poll booth season. The midterm elections and ads on television are already taking aim at us. I’m not the one to tell you which candidate to choose or how to vote on any given issue.

I’m only here to remind you to think for yourself. Don’t waste your voting bullet to shoot down a harmless or perhaps even helpful target. 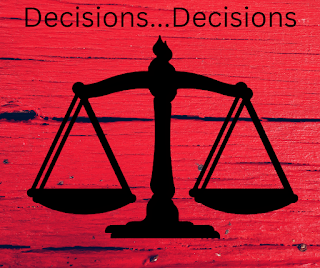