For those of you following my Citizen Police Academy journey, I’m happy to report I survived the S.W.A.T. team adventure this week.

This is a police tactical unit trained to use, as the name indicates, special equipment and employ maneuvers necessary for unique situations. For example, someone may be armed and barricaded in a building. He or she may have hostages to be rescued. We’ve all seen the scenarios on television.

In fact, we watch television and we get a fairly accurate picture of the makeup of a S.W.A.T. team. We understand the team consists of a commander and negotiators. We see armed police officers including those with rifles. And there are members of the team identified as “entry personnel.” Those are those heavily protected guys we watch carry shields, knock down doors, and rush into the scene.

So if television offers a clear picture, why take the class? What is left?

Becoming part of the team.

Well, at least participating in some training. The S.W.A.T. team uses three vehicles: An armored boxy looking vehicle to carry the team to the crime site, a transport vehicle to take hostages or bystanders to a safe location, and the Command Operations Platform. (Yeah, I know…it spells COP.)

Half of our class climbed into the black boxy armored vehicle called “the BEAR.” It has heavily plated walls and bulletproof glass. Here’s a pic: 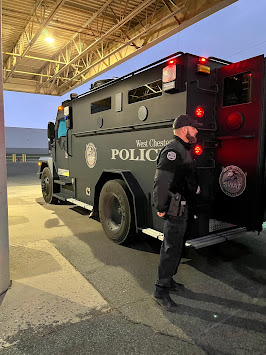 The rest of the class boarded the transport vehicle. We left the C.O.P. behind and rode to a country location (who knows where…) to engage our own bit of training.

There we learned about the tactics our S.W.A.T. team uses. For this exercise, they presented us with a few scenarios. The property is set up with the walls of a house or motel with winding halls and a variety of rooms. We were the “bad guys” in that scenario. We learned about the types of weapons needed to target the “bad guys” and remove them from the building. In another case, the “bad guy” had a hostage in a car. You get the idea. The police officers walked us through the strategies and weapons they would use and why. It was pretty interesting.

But for me the most fun was that I was one of the two people selected to shoot a 40mm gun with a bullet made of rubber. This is designed to inflict pain in someone’s thigh so they’ll stop advancing. The “bullet” would bruise, but not cause permanent damage. (My kind of bullet. Just saying.) As it turned out, I hit the target.

Those of you who know me know I am not a gun person. So why am I doing all of this? Why is this particular night of value to me?

I’m a writer. I am crafting a book where the antagonist is a broken man kidnapping people across the state. My protagonist is searching for this man. He is working with the police to track him down. I don’t want to give too much away just yet, but I’m pretty sure, if everything shakes out as planned, my local police department will be at the heart of the book’s success.

And just for fun, here are a few more pictures: