Word Count Wednesday: Local Color OR What is a Fish Boil?

I appreciate books that give me a glimpse of the uniqueness of a place or time. I read John Grisham’s Pelican Brief and feel like I am in Louisiana. I read Lawana Blackwell’s chronicles about life in 19th century England and I catch a glimpse of a time and place long gone. (Though I do tend to crave a cup of tea.)

Since I chose Door County, Wisconsin as the setting for my novel, I wanted to bring a piece of the Door County culture into the book. In the story, Sonja (my main character for those of you new to the blog) has fallen for a young man. She met him in Colorado and now he has come to Fish Creek where Sonja lives and works. She takes him to a fish boil. So what is a fish boil? Well, read this excerpt and see what you think about this Door County tradition.

“A fish boil isn’t just dinner,” Sonja explained to Damon. “It’s an experience. That’s why we have to get there early.”

The restaurant was a little less than a mile away so they walked down Main Street acting like tourists, stopping to take in the colorful displays of local vendors. The two arrived at Grady’s log building about a half hour early. Patrons of the restaurant were invited out to the backyard of the structure where they stood around with their drinks in hand to witness the boiling of the fish. As two men piled wood on the fire, the host told his guests what they could expect. Sonja and Damon watched with fascination as the water in the cast iron kettle above the wood fire began to boil.

The head cook lowered a basket of red potatoes into the salted water and then lowered a second basket filled with chunks of whitefish freshly pulled from the waters of Lake Michigan. After a few minutes, oils from the fish rose to the top. Guests were warned to stand back as the cook’s helper tossed kerosene on the wood fire. The flames shot up and suddenly the water boiled over causing everyone in the crowd to cheer. The head cook removed a piece of fish, deemed it perfect and everyone moved back inside to be served their plate of fish and potatoes.

Sonja and Damon sat down to their salad while they waited for their plate of fish. Sonja explained it would be drenched in melted butter but was the best fish you could ever want.

“I’ll trust you on that,” Damon conceded. “You were certainly right about this being an experience.” 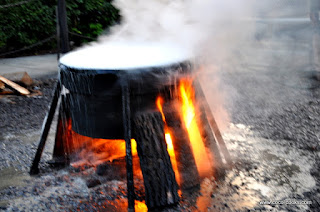 “All of Door County is an experience,” Sonja teased.

“The Chamber of Commerce should hire you,” Damon teased back. 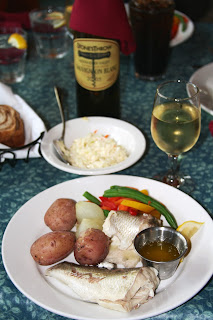 Dinner proved to be as delicious as Sonja had promised. Afterward, the couple strolled back to Shirley’s arm-in-arm. Damon stopped at a small shop and purchased two ice cream cones. The evening was perfect.

A small blue Honda was parked on the street in front of Shirley’s Cuppa Joe. Sonja recognized it immediately.

“Rose!” she gasped. It was only on seeing the young librarian’s car that she remembered the plans she and her friend had made for the evening. She raced ahead to find Rose sitting on the porch.

Considering the typical novel is around 80,000 words, I am about halfway there!  However, I should tell you that as I begin to edit and revise, my word count will be all over the place.

I think that's what next week's post will be about.

Paring down to the words that really count. Are you in?

Posted by A Novel Creation at 3:46 AM