Shadows of Light Through the Fog

Shadows of Light Peeking Through the Fog

My maternal grandmother had dementia. It was difficult. I watched as she slowly withdrew from family gatherings. She knew her limitations. It disturbed her. It pained me.

Once as the family gathered in her living room, I joined Grandma in the kitchen. She admitted to me she didn’t know some of the people in the room. I told her to sit by me and if she wasn’t sure of someone’s identity, I’d tell her. It worked.

I have gained new insight into what she likely felt.

If you are one of my readers, you know I recently recovered from COVID.

I’ve heard a number of people speak of COVID “Fog” or COVID “Memory”.  That fog is real. That memory, or rather lack of memory is unsettling.

A couple of weeks ago, my oldest grandson and my mother came to my house. I was past the contagious stage and enjoyed chatting with both of them. At one point, my mother commented on a container of pansies on my kitchen counter.

“Where did you get the pretty flowers?” she asked

I wracked my brain. “Uh…I think Allison gave me those for my birthday,” I said.

My mother and grandson exchanged looks. My mother was the first to speak. “Your birthday is in May.”

I tried to wrap my head around that. “Oh, that’s right. Maybe they were for Mother’s Day or Easter,” I said. Too bad I didn’t realize it was the first day in April. I could have maybe pulled it off as an April Fool’s joke.

I was confused. We talked of something else, giving me a brain break. Finally, I remembered where I got the flowers. I interrupted the conversation. “I remember now,” I told them. “My neighbor gave me the flowers as a thank-you.”

And she did. I can’t help but wonder if they believed me, though.

I was experiencing an inexplicable memory loss. And it wasn’t that I simply didn’t remember who gave me the flowers, the calendar in my head was jumbled as well.

Later, as the image of my sweet and loving grandmother popped up on my digital photo frame, tears came to my eyes. I finally understood the sort of fear and pain she experienced as she began to realize her memory was failing her.

It’s bad enough to be confused or to not remember something, but to know you are doing it and can’t control it is as I said, unsettling.

Because of my grandmother, I have always been tender to those with dementia, but now I have new insight. I have a new respect for the battle they fight on a daily basis. They fight a battle within… wrestling to remember people and events… a daily struggle to organize moments and language and push through an unwanted fog.

Though I hope this will be my final blog post that even has the word COVID in it, I pray my appreciation for all with dementia will continue to grow.

And who knows? Maybe as researchers study more about COVID “fog” there will be a breakthrough in addressing dementia. 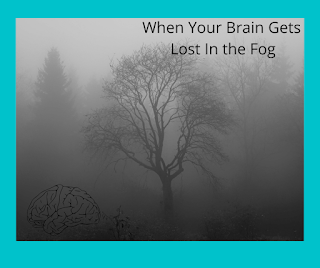 Can You Find It?
Posted by A Novel Creation at 9:30 PM