Mention the name “Fernald” in the Cincinnati area and you will receive everything from shivers to perplexed stares.

And when you tell them what a great time you had exploring the center there, longtime residents are shocked. “At Fernald?” they ask. “Do you glow in the dark?”

Have I piqued your interest?

From 1951 to 1989, Fernald operated as a uranium processing facility. It was one part of a nationwide Cold War weapons effort.

In 1989, contaminants were found released in the
environment. Environmental remediation became the priority. Since the cleanup, the thousand plus acres have been converted into restored wetlands, prairies, and forests. There are seven miles of hiking trails where you can enjoy a variety of wildlife. On my first visit, I didn’t even leave the visitor center to watch a young deer loping across the grassland beyond the water.

I had an uncle who worked at Fernald. He was
a guard. All we knew was that if you landed a job at Fernald, you were lucky. Uncle Dan was a security officer for over thirty-six years, starting in 1951 and retiring a year before the plant’s shutdown.

When as a child I heard he was a “guard,” I envisioned him standing at one of those little buildings at the gate to simply check people in or out. I now know there was much more to his job. The man was trained to secure and protect.

The facility carried the obscure name Fernald Feed Materials Production Plant. It was an accurate name for what they did, but as the plant was located in a farming area, most people waved it off as a dog food plant. There were, after all, red and white checked water tanks on each end of the area similar to the Ralston-Purina symbol. I only recently learned those tanks are all over the country as an obstruction signal to low flying aircraft.

I’m pretty sure all of this falls in the “Never Too Old To Learn” category.

And speaking of learning…wow! The preserve’s Visitor Center offers one of the best accounts of the history of the Cold War available. The interactive displays are professionally done. The story of Fernald…from a rural crossroad community in southwest Ohio to a major player in the Cold War era is presented in a meaningful and powerful way.

I’m old enough to remember air raid drills in school just as we now have fire drills, tornado or hurricane drills, and intruder drills in our education facilities and offices.

My friends may shiver or gawk when I tell them about visiting Fernald, but the people working at that facility, from the guards to the Mohawk iron workers constructing the seven story buildings to those working in each aspect of the nine individual plants, including the janitors and office workers were engaged in top-secret work they knew only to be “For the Greater Good.”

The facility that once fabricated uranium fuel cores for nuclear weapons is now a beautiful, tranquil nature preserve. Our guide, Angela, who is part of the Legacy Management team supported by the Department of Energy proved to be a wealth of knowledge.

If you visit Fernald you will not see any of the nine operations plants once there. But, if you’re lucky, you’ll see swans on the pond, birds in the trees and grasses, and a wide variety of four-footed furry creatures from big cats and wild bucks to the smallest of critters.

And then there is the Visitor Center… It may not be “Top Secret” anymore, but the Fernald Preserve is one of the best-kept secrets of the Miami Valley in Ohio. 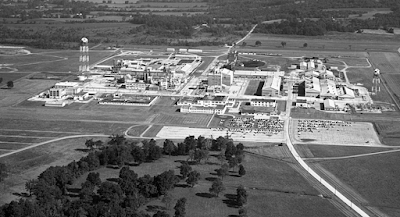