My granddaughter was visiting. She wanted to set up the toy train set. As we began laying the track I couldn’t help but think about how much this was like the second Act in my novel. My first draft was much like laying down track, a straight line from beginning to end. As Nora and I played, we made the track more interesting by adding a few turns, a bridge and a small hill to climb. Eventually we set up trees and buildings along the tracks. 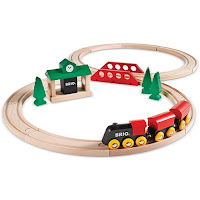 I have been working this past week to do precisely the same to my manuscript. I have been making sure I have a few twists and turns, an uphill climb for my main character. Along the way I added some descriptive setting elements. I am working to bring it all to a satisfactory end, my destination. I had to read Act II several times, refer to Act I to make sure I had laid down the proper track to set my story rolling. I  once read that to keep the momentum, a writer should use shorter sentences during Act II. That has been part of my work this week. I have also had to make revisions at multiple levels such as changing the order of events, rewriting passages for clarity and so forth. This has been a messy work week. Messy but rewarding. I cannot tell you it is finished. I have, however, decided to move on to Act III. I know my rewrites will take me back to both Acts I and II as I start digging into Act III, but the end product will be far more polished and closer to completion.

Goals for Act III
My main goal for Act III is to bring everything to a satisfactory end. I need to make sure I tie up all loose ends. Also, my villain (yes, I really do have a villain) will reappear in this act. He will rear his ugly head and my hero will need to come face-to-face with him. I like happy endings and I enjoy endings with a bit of a twist. More importantly, however, I need to actually have an ending. I don’t like those books where I feel compelled to write my own ending because the author left me hanging.

How My Novel Measures Up
On my first read through the remaining pages of my book I must say I am rather satisfied with the outcome. I think I addressed all questions pertinent to the story. I like how I handled my villain. I have an ending I like but I gave it a bit of a twist at the very end. Overall, I am pleased. I do see that habit of telling instead of showing has emerged in a few areas and I have a character arrive on the scene who really should have appeared much earlier. I didn’t realize I needed her until now.

Where Do I Go From Here?
I will start with going back into the manuscript and weaving into the earlier pages a character I need to make the outcome stronger (and make sense). I have some idea of how I will do this. I also need to spend this next week recasting those portions of text where I got away from showing my readers what my characters were experiencing. I need to make sure I have achieved a sort of balance in that. It is a process, but one I enjoy. Okay, maybe enjoy isn’t the right word. I’ll just have to live with it until the next rewrite.