I teach fourth grade. Ten-year-olds are an interesting lot. They are full of hope and dreams and sure they can do it all! They’re industrious and anxious to learn everything they can about the way the world works. Of course they’re still learning how to get along with others around them, but they keep trying, working out the nuances of communicating with people they didn’t know until coming into this class. I love my students. 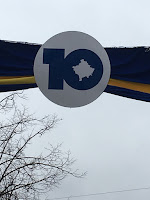 I was at a huge birthday party this past weekend with some friends. Actually, it was a huge bash with thousands in attendance. It was in celebration of Kosovo’s Independence Day. Ten years ago, after a war at the turn of the century and eight plus years of NATO peacekeeping forces on the ground, Kosovo officially became a nation. 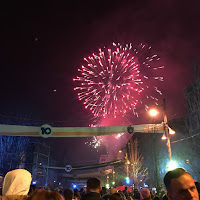 February 17th was a day of celebration. As some of my teacher friends and I stood together for the big celebration and concert on Mother Teresa Boulevard, it occurred to me a nation goes through many of the same growing pains we do as people. 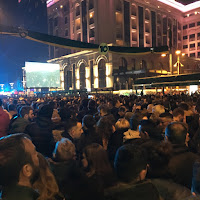 Kosovo, so young and full of energy is still learning how the world works and how they fit into the scheme of it all. These are a people full of hopes and dreams, not only for themselves but for their descendants, the future of Kosova.

Half of Kosovo’s population is under thirty years old. There was an excitement in the atmosphere that evening that was almost palatable. Families and friends enjoyed the night of music and festivities. Children were hoisted on their father’s shoulders to see Prishtina born singer Rita Ora and enjoy the fireworks.

I felt so blessed to be a part of it all. But then, I’m a mom. I know the joy of ten-year-olds. I only pray the nation is ready for the teen years.

Join me in Kosova (the Albanian pronunciation for Kosovo) in Southeastern Europe. Each week I share my experiences. Leave your comments and questions below. I’ll try to address each as best I can. And if you don't want to miss a post, simply add your email address in the box on the right where it says "Follow by email."
Posted by A Novel Creation at 12:00 AM