One Man’s or Girl's Junk…

You may have heard the saying, “One man’s junk is another man’s treasure.” It may well be the slogan behind many a garage sale.

In preparation for a move, my daughter decided it was time to clear the house of unwanted “junk.” Though my granddaughters were at first reluctant to part with old toys, the promise of lining their pocketbooks with money from a yard sale proved to be strong motivation to purge the house of many a stuffed animal, game, or plastic toy.

If you read my post a couple of weeks ago about the toy box turned coffee table, (Click HERE) you know I did a toy purge of my own.

I decided to keep a few toys around for my grandchildren when they visit. So why am I “playing” with them? 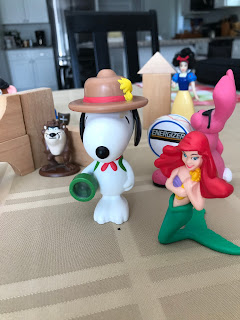 It is all part of crafting my new suspense novel. Yes, I could use a storyboard, but I can move these figures around easily.

The hero of my story (Snoopy here) is a real boy scout. He has two important women in his life, “Ariel” and “Snow White.” Ariel is his office manager and she could, in his words, “Chew you up and spit you out in a heartbeat.”

Snow White is also a woman to be reckoned with. She is the contractor remodeling his house. She also becomes, over time, his love interest.

So why am I playing with these toy figures and blocks instead of writing? 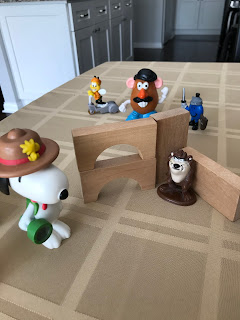 I have a villain (Mr. Potato Head) and he has a few henchmen doing his bidding. See Taz in the corner of Snoopy’s office? Yep, the bad guy has someone working on the inside.

In crafting a suspense novel, I need a few red herrings. That is to say, I need to cast suspicion on a few possible insiders so my reader isn’t sure who is the bad guy.

It may sound silly to most people, but using these old toys to stage who is who and where everyone is at this point in the story actually helped me over a critical stumbling block in my timeline.

I may have to visit my granddaughters’ yard sale Saturday. Who knows what story I may find?