My oldest granddaughter approached the principal of her school with the idea of starting a “Kindness Club.” The idea was to gather a group of students who would commit to writing encouraging words and notes to classmates, tucking them into their desks or lockers randomly.

I don’t know about you, but I think a year of receiving encouraging notes without cause is better than one fancy Valentine card in February. 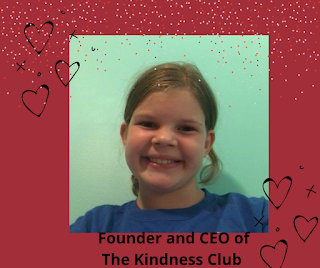 The timing for me was interesting. My Bible study group is studying people in the book of Acts—Acts of the Apostles in the New Testament. This week we examined Barnabas. We don’t often look at what some consider the minor characters in the Bible.

When Barnabas learned of Jesus he gave himself over fully to the cause of Christianity. He was, in our modern thinking, completely “sold out.” We know from the book of Acts he supported the growing church financially. That alone is major, but if you read the text carefully, you see he was a person who simply did what was needed when and where it was needed.

Barnabas trains other believers. He travels as a missionary. And when Paul, a new convert, begins to take center stage, Barnabas supports him. Barnabas is an encourager. He doesn’t have to be in the limelight. That is powerful.

Without those to encourage… babies would play with sounds but never speak words…. A six-year-old would give up riding a two-wheeler after the first fall... Leaders would fail… Man would never have walked on the moon.

You think I’m exaggerating? Nope. Not at all.

Affirming words are the love language of success.

You may still want to give someone a Valentine card or a box of chocolates, but trust me… offering sincere words of encouragement will last longer and mean more.

I have been blessed to have had a bevy of encouragers throughout my life. My grandparents and parents encouraged me to do my best in school. When I wanted to pursue an advanced degree, my husband signed me up for a class. When I decided to become an author, he didn’t question my decision. He merely said, “You can do that! What are you going to write?”

In turn, I try to encourage my own children and grandchildren.

Along the way, I’ve learned it isn’t about succeeding. It’s about trying.

To try, we often need someone on the sidelines cheering us on. We all need a Barnabas in our lives. And…we would do well to be a Barnabas to others.

So here is your challenge today…this week: Speak encouraging words to someone or write an encouraging note for someone.

You can do this. I know you can!